«Since the capitalist and workman have only to divide this limited value, that is, the value measured by the total labour of the working man, the more the one gets the less will the other get, and vice versa. Whenever a quantity is given, one part of it will increase inversely as the other decreases. If the wages change, profits will change in an opposite direction. If wages fall, profits will rise; and if wages rise, profits will fall.» («Karl Marx, «Value, Price, and Profit», MECW, Vol. 20, p. 137).

In the law formulated by Marx lies the real basis of the so-called «anti-inflation plans», which are primarily characterized by the authoritarian freezing or the «monitoring» of wages by the state which the developed capitalist countries, such as the USA and Great Britain and recently Germany and – de facto – France, have implemented.

The general tendency of capital (which is not an «iron law», but in fact a tendency which other tendencies may move against, especially those resulting from the association of the proletarians in defence of their immediate conditions of existence) is to lower wages:
«The general tendency of capitalist production», writes Marx in «Value, Price and Profit», «is not to raise, but to sink the average standard of wages». (ibid., p. 149)

This general tendency asserts itself in various ways, which result either from the general laws of capital or from the balance of power existing at any given moment between the buyer and seller of labour-power.

The capitalist mode of production is characterized by the constant tendency to develop the productivity of social labour by means of accumulation of capital, which in the language of productive technology means: the use of ever more perfected means of production on an ever-wider scale. If the productivity gains are realized in the industries producing consumer goods, this tendency causes the reduction in the production time of the means of subsistence necessary for the reproduction of labour-power, that is, the lowering of the value of labour-power; and so capital receives – through a mechanism that not every single capitalist uses consciously, but that results from the functioning of the entire societal capital, which obeys the immanent laws of capitalist production – an additional surplus-value, which Marx calls relative surplus-value.

&l«Hence there is immanent in capital an inclination and constant tendency, to heighten the productiveness of labour, in order to cheapen commodities, and by such cheapening to cheapen the labourer himself.» (Karl Marx, «Capital», Volume 1, Chapter 12, MECW, Vol. 35, p. 324/325).

This tendency towards lowering the value of labour-power can also prevail in other ways, and this time with full consciousness. Think, for example, of the generalisation of potato cultivation in Europe in order to provide the working class with cheaper food than that of grain; think of the employment of women and children, of the importation of cheap immigrant proletarians, of investment in countries where wages are very low, and so on: all means are good for increasing the rate of surplus-value and the rate of profit so that the maintenance costs of the productive slave become as low as possible.

That is why capital is not satisfied with regularly lowering the value of labour-power: in its daily relationships with the wage labourer, it constantly seeks to rob the labourer even more by trying to pay for the labour-power not at its value but below its value. In the chapter on the production of relative surplus-value, Marx notes that «despite the important part which this method plays in actual practice, we are excluded from considering it in this place» due to the stage of the theoretical development. (ibid., p. 319). And when in the third volume of «Capital» he enumerates the causes that work against the law of the tendency of the rate of profit to fall, he speaks of this practice immediately after «increasing intensity of exploitation»:
«II. Depression of wages below the value of labour-power This is mentioned here only empirically, since, like many other things which might be enumerated, it has nothing to do with the general analysis of capital, but belongs in an analysis of competition, which is not presented in this work. However, it is one of the most important factors checking the tendency of the rate of profit to fall.» (Karl Marx, «Capital», Volume Three, Chapter 14, MECW, Vol. 37, p. 234).

For the wage-earning classes, the inflation phenomenon has determined as a consequence the tendency to constantly lower the purchasing power of wages (to reduce real wages), i.e. to pay for labour-power below its value, which allows capital to counteract the tendency of the rate of profit to fall.

The fall in the average rate of profit – as demonstrated by Marx in the third volume of «Capital» – is a historical tendency of the capitalist mode of production, caused by accumulation on an ever-broader scale, and the ever-increasingly enormous quantities of means of production (especially of fixed capital, that is to say, equipment and machinery, etc.) that are put to work. While the capitals obey the general law, they at the same time seek to escape it individually; in particular, the monopolies and cartels can – by arbitrarily increasing their selling prices – achieve a higher profit than the average rate: thus they seize a higher part of the global surplus-value extorted from the whole of the working class. Of course, all of this happens to the detriment of the industries, in which a competitive situation forbids the artificial increase of prices; which provokes the cries of the small capitalist entrepreneurs – so precious in the heart of the opportunist parties – who feel robbed by the «big» monopoly sharks. With the development of production, concentration, monopoly and cartels have a tendency to spread more and more and to encompass an ever-increasing number of industries, and thus monopoly practices generalise. Driven by the tendency of the rate of profit to fall, the arbitrary price increases generalize. The totality of prices rises without the corresponding creation of additional value. The purchasing power of the currency is falling, which leads to new price increases and so on and so on… This phenomenon does not depend on the will of capital or of the capitalists, nor on the «good» or «bad» administration of governments which would supposedly be so powerful that they can escape the laws of capital: this phenomenon is an expression of the objective laws of the most developed capital.

Despite all the anti-inflationist declarations made by their leaders, the bourgeois states cannot combat the real causes of inflation; that would require them to attack the very roots of the capitalist mode of production – the categories of the commodity – of which inflation is just one of the many convulsive developments. Even if one were to assume that they had this ability, the sense of capitalist realities would forbid it; considering capital at its most abstract level, inflation has in fact immediate positive consequences: by insidiously consuming wages, it allows for labour-power to be bought below its value. And so it appears as one of the expressions of the constant tendency of capital which enables it to work against the tendency of the rate of profit to fall.

Since the bourgeois state cannot and does not want to fight the causes of inflation radically[1], it must, however, try to contain the inflationary surges within certain limits, which are not based on the laws of capital in general, but on the concrete conditions of its development in bourgeois society. What are these limits? The first has to do with social and political imperatives: the rise in subsistence prices must not be so high that it causes a brutal reaction from the working class that threatens the sacred production. As the OECD wrote in its report for the first half of 1973
«high inflation rates (…) produce distortions in income and wealth structures that are not only unjust but also cause permanent social tensions…» («Le Monde», March 21, 1973).
The second limit is related to the laws of competition, that is, the laws of the relationship between the various capitals: the increase in prices must not be greater in one’s own country than in the other competing countries, because in this case, the competitiveness of exports on the world market would suffer. The bourgeois economist R. Barre recently expressed this necessity:
«Inflation is a phenomenon that affects the whole world; So it is very difficult – wherever it may be – to avoid a sharp rise in prices, but it is necessary, however, that the rise in a country does not overtake that of its most important partners and competitors. If the price increase in France is weaker than in Great Britain, Italy and Spain, it is twice as high as in the USA, Switzerland, Belgium and the Netherlands and much faster than in Western Germany. Such a development, if it continues, would quickly call the competitiveness of the French economy into question.» («La Vie Française», May 2, 1974).

By and large, as Giscard d’Estaing explained, for the bourgeoisie
«inflation means internal disruption and weakening for our competitiveness abroad, that is, a double threat to the continuation of our growth» («Le Figaro», December 7, 1973).
The phenomenon is tolerable and even, literally, profitable for capital if the two conditions set out above are met (that is, in the language of capital, that inflation is kept «within reasonable limits»).

This explains that the «anti-inflation plans» initiated by the states never reduce the price increase to zero, but at most try to restrict it within certain limits (the employers everywhere, for obvious reasons, are fiercely against any price-stop for the goods they produce). These anti-inflation plans are essentially characterized by the freezing or «monitoring» of wages. For capital, the advantage of inflation is to increase profit and reduce wages: this advantage would be lost if the demands and struggles of workers would catch up with these wage cuts. The bourgeois political economy immediately decreed that the real culprit in regard to inflation were the workers’ excessive wage demands and introduced a central wage freeze. If you look at the published statistics for the USA and Great Britain, the effect of these measures was easy to observe, as the graphs at p. 76 show.

For each of the two countries under consideration, the curves show the development of the share of wages and the share of profit in the national income (let us remind that these two quantities are neither a rate of surplus-value nor a rate of profit) since the wage freeze plans came into force. The graph of England was published in the «Financial Times» on October 9, 1973; the second representation was worked out with the help of the corresponding American statistics[2]. Due to differing calculation methods, the figures in both countries cannot be compared with one another. Both graphs do not need a comment as they clearly explain what we wanted to show:
1. the result of the so-called anti-inflation plans, which consist in reducing the share of wage earners and at the same time increasing the share of profits;
2. The correctness of the Marxist theory about the antagonistic relationship between wages and profits, itself only an expression of the antagonistic relationship between proletariat and capital.

This is the real meaning of the calls for the «fair division of sacrifices» within the framework of «class harmony», as shown by the numbers! 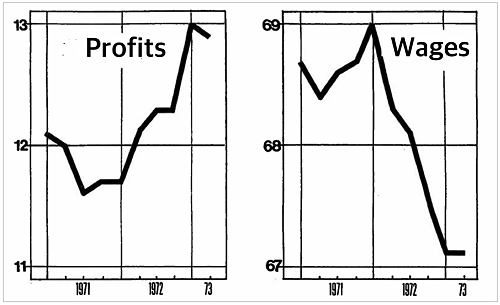